Using this tool is quite simple. First you need to set the path to javapackager.
On Windows the path will be similar to:
C:\Program Files\Java\jdk1.8.0_51\bin\javapackager.exe
Click to expand...

I am not sure how I am supposed to "set the path" to javapackager
Am I supposed to add C:\Program Files\Java\jdk1.8.0_51\bin\ to the PATH environment variable (Computer->Properties->Advanced System Settings->Environment Variables->System Variables->PATH)?
Looking at the Paths Configuration in B4J, I do not see any option to set path other than for javac.exe, libraries or shared modules, and those only accept one argument which is already used.

Then later on it says:

then set the path to the Jar file
Click to expand...

I assume that means I have to point this variable declaration

to my java program's jar file?

Thanks in advance!
Sort by date Sort by votes 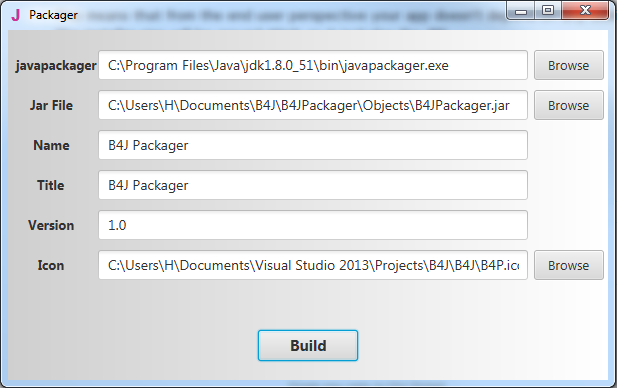 All the fields are here.
[B4X] Features that Erel recommends to avoid
[B4X] "Code Smells" - common mistakes and other tips
Upvote 0

What am I supposed to do with this?

B4J Packager has no form, how did you get the form to show?

I am sorry, I am just very frustrated...
Upvote 0

If you want to use B4JPackager11 then you need to download Java 11 package. Follow the installation instructions: https://www.b4x.com/b4j.html

Don't download any other version of Java 11. It will not work.
[B4X] Features that Erel recommends to avoid
[B4X] "Code Smells" - common mistakes and other tips
Upvote 0

Licensed User
Ok, that probably explains some of the problems...
What are the differences between B4Jpackager and B4JPackager11?
Why would I use one versus the other?
I am trying to get my project into an exe that I can run on a computer that does not have B4J.
Right now, I am unable to even run the program outside of the B4J environment on the same computer and I have not found how to run it from the command line or Explorer (Windows 10).
Thank you

PS: when you say "Don't download any other version of Java 11. It will not work.", does it mean to run B4JPackager, or to run the resulting program? I am trying not to use the Oracle version of java, even though using it just to create the exe would probably be OK.
Upvote 0

Use B4JPackager11, however first test your app using Java 11. It will most probably work without any changes.


Didier9 said:
does it mean to run B4JPackager, or to run the resulting program?
Click to expand...

In all cases. Use the Java link from the installation instructions.
[B4X] Features that Erel recommends to avoid
[B4X] "Code Smells" - common mistakes and other tips
Upvote 0

Licensed User
Ok got it, thank you a bunch!
I did it with B4JPackager11 and the java 11 package I downloaded from the B4J install page (OpenJDK).
I had also downloaded jdk-11.0.2 and javaFX separately and my program was running with that under the B4J environment but B4JPackager11 complained about the swing module missing.

Anyhow, I am out of the woods for now, thank you again.
Upvote 0

Licensed User
One more question: to run the exe on another computer, what do I need to do in addition to copying the exe?
I assume I need to copy the jdk11? what else?
Upvote 0

Didier9 said:
to run the exe on another computer, what do I need to do in addition to copying the exe?
Click to expand...

This assumption is wrong.

Licensed User
I copied the exe on another machine and ran it.
I get Windows error message: "Could not find the main class, program will exit"
The executable is only 92kB, which seems very small for a standalone executable.
Upvote 0

Licensed User
This is weird. When I did the same thing on my home machine (Windows 10), the exe was the same size but it ran.
Now on this windows 7 machine, I get this message (when running the debug batch file)
Note that I rebuilt it, I did not copy the exe from the Windows 10 machine.
If I try to run the exe built on Windows 7 on a Windows 10 machine, I get a different error that the OS is different.