Licensed User
Longtime User
I am encountering the same issue described in an older thread : when I tap on an EditText to type into it, I get exactly the same result as the picture here :
A large bubble over the keyboard, and a small button on the right, which says "next" if several EditText are on the screen, and "Done" when it is the last one.

I am not so sure it is Android bug : it does not manifest with other apps. Could it be a feature, that needs to be turned off to make sure to edit in the layout ? 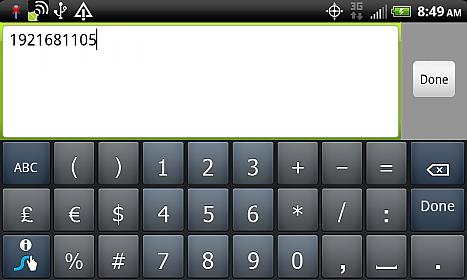 Licensed User
Longtime User
I have pursued tests about the strange behavior of the EditText.

Here is the behavior of an app comparable to what I am creating, where the edit fields behave as expected:
http://micr-fonts.com/ba/oket.mp4

It looks like there is some option that will allow or not the bid bubble data entry, as opposed to the expected on screen entry.
.
Michel Bujardet
Match Software
http://CheckWriter-Printer.com
Upvote 0

Erel said:
This is the default behavior in landscape mode.

Oh, I see you have replied while I was posting my videos.

I will check out the link you posted. Thank you Erel
.
Michel Bujardet
Match Software
http://CheckWriter-Printer.com
Upvote 0

Thank you Erel
.
Michel Bujardet
Match Software
http://CheckWriter-Printer.com
Upvote 0
You must log in or register to reply here.