I post here my question because I don't know where to post it, sorry for the inconvenience.

I bought a Samsung Tablet 7" (model SM-T210) but I have some problems with GPS receivers.

Here is in attachment an image with GPS test where you can to see that my phone see 11 satellites, and tablet see only one satellite

I have try to reset (factory reset) the tablet, but it no change.
I have also try to run "GPS doctor" https://play.google.com/store/apps/details?id=com.epekware.gpsdoctor
This program reset all GPS datas and download new datas from internet, but no change

Is there some things that I can try to do before send my tablet to the technical assistance ??

Many thanks for your support
Sergio 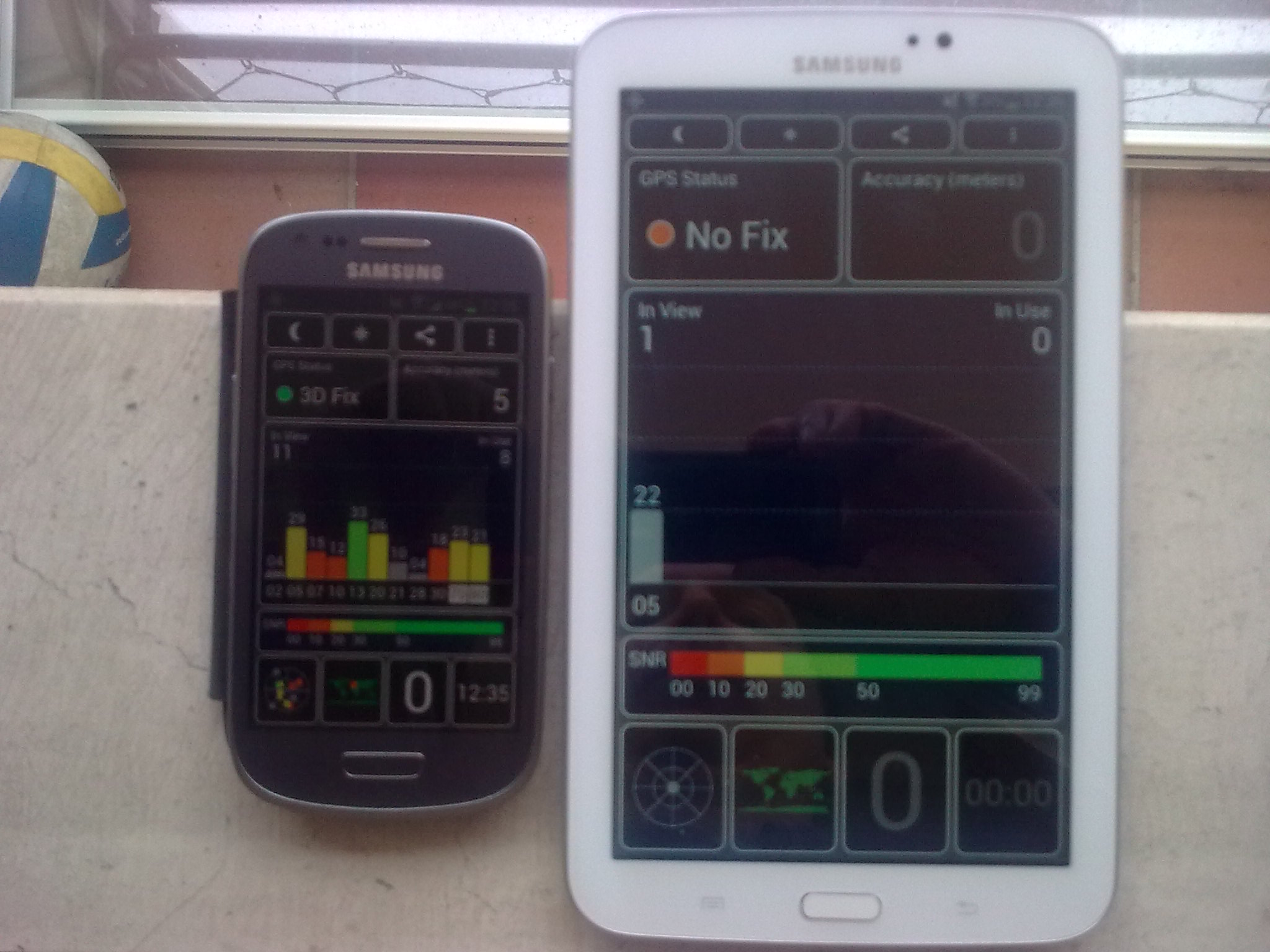 Licensed User
Longtime User
Have you tried just leaving it on for a few hours? Sometimes, it needs to update the orbits of the satellites (for example, whenever USA goes to war, they adjust the orbits a bit to get better coverage over that area), especially a new device, and that may take some time. The satellites are on 90 minute orbits, so three hours should get most of them, and six will probably get them all. Once it gets current data, it will just keep itself updated on the go, if you don't shut off the GPS.
Try my apps: SerialVideoPlayer Full Free | JukeDroid Full Free | AlwaysSMS Full Free
Upvote 0

Licensed User
Longtime User
Many thanks for your answer, I will try it
███ Italy
Upvote 0

Licensed User
Longtime User
Yes, the test was made outdoors, in fact as you see from the image above my phone works correctly
███ Italy
Upvote 0
G

Licensed User
Longtime User
Hi sirjo66
I have the same tablet and it works fine for me.
attached is a screenshot of the tutorial app I tested from this site ( https://www.b4x.com/android/forum/threads/gps-tutorial.6592/ )
You can see from this that I have 11 satellites identified

What I have experienced, and also with the gps navigator in the car, is that you do need to move for the device to better locate satellites.
The screen shot was taken after I had driven in the car for a while. It did not take long for the first 4 to show up and the rest took only a little more time.

Licensed User
Longtime User
Another thing, depending on where you live, positioning if the reciever is important. Nominally, the satellites are in polar orbits, but, because they don't want extensive coverage of the poles, the orbits are tilted (55 degrees, iirc), so the satellites turn at about 55 degrees latitude (varies a bit with each satellite).

So, what does this mean? Well, for me, who lives at about 60 degrees, I need to place the reciever so that it has a view of the sky south, because I will have few or no satellites north of me. This is very noticeable when driving with the phone on the dashboard. When driving south, I get many more satellites than when driving north, as the car roof blocks the view.

I have send my tablet to the technical assistance and he have change main board, now it works very fine !
███ Italy
Upvote 0
You must log in or register to reply here.