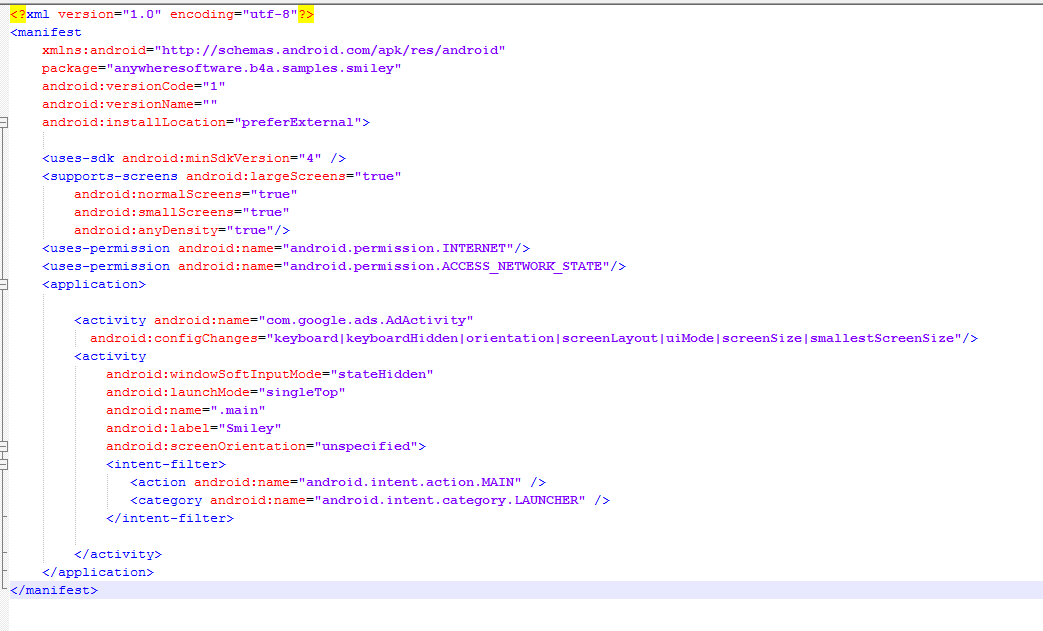 Licensed User
Longtime User
Looks really good Erel, great solution. I've got a few apps lined up to test it on in Beta.
If you profit from my contributions or just find them useful feel free to:

One question: I have once written a widget only app without any activity. Therefore I removed the whole declaration of the main activity from the manifest. Will this be possible with the AddReplacement command (I think it should be)?
You like my libraries and tutorials? Please make a donation

Staff member
Licensed User
Longtime User
It is possible to remove all activities with the following code:

One quick question, perhaps not so much related to the Manifest-editor since it seems you can insert comments in the same.

What about the manifest-file itself? Is it possible to insert comments? If yes, what syntax should be used?

Thanks!
If you like or have benefited from my work, please consider a donation. Thank you.

Sent from my HTC HD2
If you like or have benefited from my work, please consider a donation. Thank you.
O

Licensed User
Longtime User
I have two activities, "Main" and "Drip". Right now "Main" is the start up activity. How can I switch it to "Drip"?

Staff member
Licensed User
Longtime User
This was a bit challenging...
You can switch the name of two activities:

Licensed User
Longtime User
Erel, I tried to use the '|' char in the rightmost arg of the SetActivityAttribute statement, and it complained until I removed it. this is what I tried


B4X:
which is perfectly allowable as it OR's the two values together.

am I missing something? or do it wrong?

Staff member
Licensed User
Longtime User
Which error did you get?
I just tried it and it works correctly
[B4X] Features that Erel recommends to avoid
[B4X] "Code Smells" - common mistakes and other tips
M

Licensed User
Longtime User
Can anyone help me with this?

Staff member
Licensed User
Longtime User
Not sure that this is the only problem, however permissions should be either with two quotes or without any quote. Your code only includes a quote at the end.
[B4X] Features that Erel recommends to avoid
[B4X] "Code Smells" - common mistakes and other tips

Licensed User
Longtime User
I'm trying to prevent the ability to add an activity shortcut to my app in the launcher. From Stackoverflow, I found the following. It says to remove the category LAUNCHER section from your manifest. This would be for the Main activity. The thing is, I can't figure out how to remove this. I tried creating an empty value for the action, but B4A automatically puts another copy of the intent section in the manifest.

I suppose if need be I can manually edit and lock the manifest, but I hate to do that. Any ideas on how to achieve this?

B4X:
NOTE: You will have to uninstall and then reinstall the app in order to see the changes.
Last edited: May 2, 2012
Resources for Newbies: Documentation - Forum Search - B4A Core - Chat Room

Licensed User
Longtime User
Thanks! That did the trick. I figured it could be done, just couldn't figure out how. :sign0188:
M

Sorry because of my english

However users with rooted devices will be able to install it wherever they want.
[B4X] Features that Erel recommends to avoid
[B4X] "Code Smells" - common mistakes and other tips
M

Oh thats not good :-(, because i dont want that users have the ability to Recompile my application, Obfusticate doesn´t work because i use a code module which transforms "a" into "A" and " " into "" :-(
Its because of the " " the compiler trows an exception
You must log in or register to reply here.