To reproduce:
- Download the official NB6 (including the updated NB6.bas) and install
- Try the first notification
- Message on screen: "Unfortunately, System UI has stopped"

Result in pic below. After pressing OK, screen starts blinking and phone is completely unresponsive. Only way to fix this is to force a reboot. 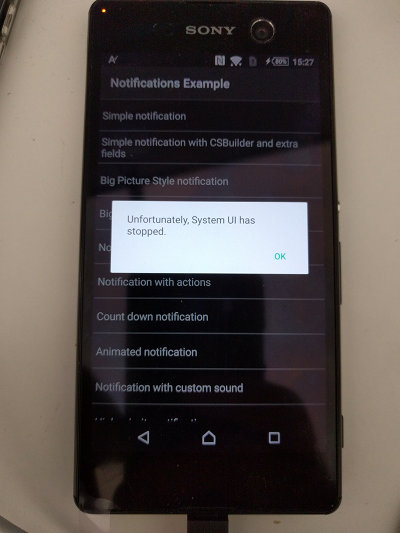 It's very difficult to test, especially because the device needs to be rebooted all the time. But as far as I can tell it's the actual .Notify(id) that's causing the problem. Stuff up to that seems to work fine.

The phone is fully updated, which means it's running Android 6.0.

(I found this as I published an update for my app, now with NB6. Users are going ballistic. Needless to say, this is very stressful for me.)
Last edited: Aug 8, 2018

Staff member
Licensed User
Longtime User
The example project creates all kinds of notifications. Create a new project with a simple notification and try it. You can check the unfiltered logs with USB debug mode to see the error message.
[B4X] Features that Erel recommends to avoid
[B4X] "Code Smells" - common mistakes and other tips


B4X:
However, if I run the "Simple notification" from NB6 and use USB debugging, these are the logs I get:


B4X:
They go on for very long, I hope I copied a reasonable amount.

Looking at the error message I get the distinct feeling that this is caused by a too large icon. (I've seen other threads in the forum where that seems to have been the problem.) However, the Smiley is 160x160 pixels, and it's resized in NB6 like this:


B4X:
And the comment for SmallIcon is as below, so that seems to be correct? Or?

Staff member
Licensed User
Longtime User
Looks like a bug in your device OS. Starting from Android 6 the notification icon can be created with a Bitmap instead of a resource. Looks like it causes your device to crash.

Which version of Android is it running?
[B4X] Features that Erel recommends to avoid
[B4X] "Code Smells" - common mistakes and other tips

Erel said:
Which version of Android is it running?
Click to expand...

Anything else to try? I'm quite desperate.

Licensed User
Can NB6 work with a resource instead of a bitmap?
J

Licensed User
I use NB6 also since some days for an app that is on market. And I got told of some crashes in developer console only concerning Android 6. Didn't know yet why they crash.

My code for notification is:

Licensed User
Please, can you upload WDnotifi.png here, I want to test a theory...
J

Licensed User
I'm making progress. Will report back in the thread as soon as I have something. Thanks for pic. Sorry for short text, fighting clock

Licensed User
Thanks to expert advice from @JordiCP, this is mostly solved. He took the thought of making NB6 work with a resource rather than a file and made it into reality - and as it turned out, that got rid of the crashes.

It seems that some versions of Android crashes in a really awful way when one tries to use a bitmap as icon. This means that this is the sub from NB6 that causes the problem:


B4X:
This is what @JordiCP came up with instead. First of all, make sure that the icon is 72x72 and in gray-scale with transparency. This is important, otherwise the icon will just be a filled box. Place the file in Objects\Res\Drawable (read-only)

Then use this code instead of SmallIcon above.


B4X:
This is not at all as polished as it should be. For instance, the Icon as Bitmap part is not used as the icon is referenced in the Java code. But it was enough to stop the crashes and display the correct icon.

Some quick notes:
- 72x72 seems to be fine regardless of display scale
- Some devices (Jordi can comment on this) failed to get the correct icon and instead showed the app icon - but at least neither the app nor the phone did crash

Again, let me point out that this is not at all as polished as it should be, there's room for improvements.

(I'm hoping that Erel might be able to comment and adjust it to make it rock solid. )

Jordi and I tested a theory that NB6 would work out of the box on the Xperia if the icon was grayscale with transparency (as opposed to your current icon, which was in color). Sorry to say, that wasn't the solution, and instead we had to go for the solution I just posted in #11.

Do you know what devices that have reported the problem? It sure would be great if you could try this solution and see if they start working.
J

Licensed User
I don`t want the users of my app to get serious crashes, so I went back to the simple notification yesterday. Hoping this was the problem. Maybe I try NB6 another time again.

The crashes appeared on Samsung S5 and Note4 devices but only those using Android 6.0.

But thank you anyway for finding out this problem and a solution. I will test in future.

Staff member
Licensed User
Longtime User
I will see what can be done...
[B4X] Features that Erel recommends to avoid
[B4X] "Code Smells" - common mistakes and other tips

Staff member
Licensed User
Longtime User
What is the output of this code on the failed devices:

Licensed User
Longtime User
Hi, I had similar issue with Galaxy S5 running Android 6.0.1
There is my solution for this:
NB6 - Notifications Builder class (2018)

Staff member
Licensed User
Longtime User
@woniol please post the output of the code I posted. We might be able to find the exact version where it fails. The source of this issue is a bug in the OS.
[B4X] Features that Erel recommends to avoid
[B4X] "Code Smells" - common mistakes and other tips

Erel said:
What is the output of this code on the failed devices
Click to expand...

B4X:
I also have two other 6.0 devices so for completeness I ran it there too.

B4X:
You must log in or register to reply here.