Could you explain a bit more about this one?

Licensed User
Thank you very much for your work and skills!!

Staff member
Licensed User
Usually when you compile in Release mode all libraries are merged into the generated jar file. This is useful as you get a single distributable file. However there are cases, especially when there are many referenced libraries that the developer might prefer to leave the libraries out of the jar. This way you can later update the program without copying all libraries.

The main scenario is server projects where you want to be able to update the server without copying all libraries (inside the jar) again and again.

Note that when you compile your app in Release mode you will see the list of libraries that are required by your app:

These libraries should be copied to a folder named libs under the jar file folder.
B4X programming - video tutorials
All Android developers should read
Teaching programming with B4X

These libraries should be copied to a folder named libs under the jar file folder.
Click to expand...

I hope the next version will also have an option to compile all the libraries to the application's jar file like before.

thanks so far. Very Good.

So far have been testing TableView SingleCell with an own DatePicker Class , but not able to selected the current date. See below as example ([31]). 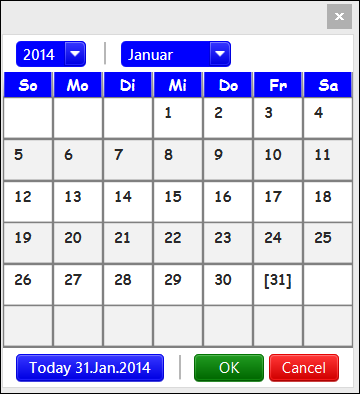