William Lancee said:
the text is broken up
Click to expand...

Licensed User
That's the way it looks on my screen, like braille. Look at the Button, CustomListView and Images for how the text should look like.

Have you tried this:

Licensed User
Thanks, I tried it, but that just made the "braille" bolder.

Staff member
Licensed User
It is related to the tablet low scale screen. Its scale is probably 1.0, right?

B4X:
It will look better if you use the attached library (v1.03) which depends on the updated BitmapCreator library (v4.72, this is the same change as done in jBitmapCreator).

Licensed User
I don't have my equipment with me. I do know that 1dip=2. I'll try the new library in about 6 hours.

After updating the BCTextEngine.b4xlib and BitMapCreator library everything works beautifully.

Thanks. I am looking forward to using this new way of layout.

Licensed User
I have been experimenting with the new BBCodeView contruct. Here's my feedback for this Beta version.

I miss the ability to specify a Horizontal offset from the left/right margins when Alignment is Left/Right.
I came up with a klutzy method using a zero height panel, which works but not for multiple positions.
Apparently the MeasureText method doesn't measure the text in the new view accurately.

Although numbered Tab stops for the whole view might work, it won't be as flexible as an Horizontal tag.

For example, a two column text could be:


B4X:
Attached is the zip file of the klutzy workaround.

In the code, you'll also see a separate concern. It is assumed that Views added to the map have unique event names.
If they don't, the events are not send.

Licensed User
Hi, on iPhone 5s am also getting the braille type of broken text. Am using the library version 1.03

Staff member
Licensed User
1.05 - New Span tag. The Span tag creates an unbreakable content. It supports the following keys: MinWidth and Alignment.
You can use it to create tables:

Width dimensions can be set with %x units. The percentage is relative to BBCodeView width.


mcqueccu said:
Hi, on iPhone 5s am also getting the braille type of broken text. Am using the library version 1.03
Click to expand...

Licensed User
I can't run on my iphone 5s again with the latest update. I kept getting this in the log.

NB: I am using Hosted Builder

Licensed User
The unbreakable span tag is a very good alternative to an horizontal offset.
A

I get the same error in B4A:

asales said:
I get the same error in B4A:
Click to expand...

You need to download the latest version of BitmapCreator: https://www.b4x.com/android/forum/attachments/bitmapcreator-zip.81067/


mcqueccu said:
Also, I realized my iBitmapCreator lib is NOT 4.71+. its version 4.70 could it be the cause?
Click to expand...

Yes. The latest version is included in B4i v5.80 (currently in beta).

So does it mean that BCTextEngine will not support B4i 5.50?

mcqueccu said:
So does it mean that BCTextEngine will not support B4i 5.50?
Click to expand... 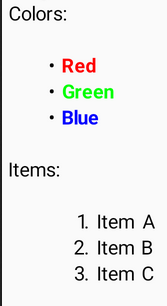 Staff member
Licensed User
1.50 - Large update. New BBLabel custom view. This is the lightweight version of BBCodeView. It is not scrollable and doesn't handle events.
- TextEngine.Initialize expects the parent view. It then searches the views tree for BB views and sets the engine. It is no longer needed to set the TextEngine for each view.
- New MaterialIcons and FontAwesome tags.
- The text can be set with the designer.