1. Edit: In B4XPages the permission result event signature is: Wait For B4XPage_PermissionResult (Permission As String, Result As Boolean)
2. Important to read: https://www.b4x.com/android/forum/threads/android-jar-targetsdkversion-minsdkversion.87610/#content 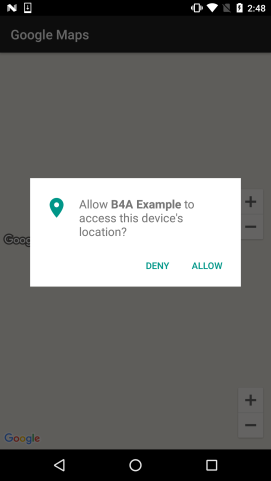 The CheckAndRequest method can only be called from an Activity.
There is another method named Check that only tests whether the permission has already been approved or not. This method can be called from any module.
It might be tempting to first test whether there is a permission and only if there is no permission call CheckAndRequest. However it will just make the program flow more complicated as you will need to deal with all cases anyway.
As a general rule, you shouldn't call RuntimePermissions.Check from an Activity. It will be simpler to always call CheckAndRequest.

Not many are aware to the fact that you can see the project permissions by clicking on the List Permissions button that is inside the Logs tab:
A very common mistake is to request a permission at runtime that is not listed in the "permissions dialog". It will not work. 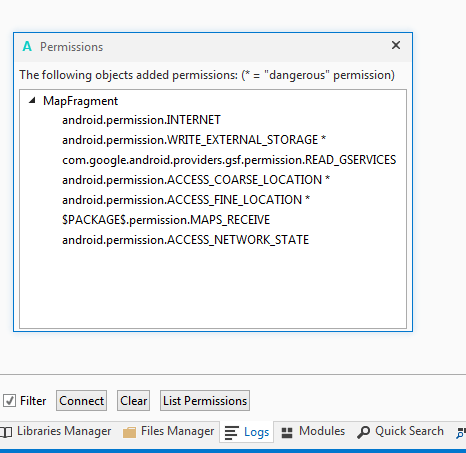 This is the most common dangerous permission. It is added automatically when you use File.DirDefaultExternal or File.DirRootExternal.
However there is a simple workaround for this.

2. Add this code to the manifest editor:

B4X:
The explanation for this is that GetSafeDirDefaultExternal doesn't require any permission on Android 4.4+ (API 19) and requires the WRITE_EXTERNAL_STORAGE on older versions. The code above adds the permission to older devices.

You only need to deal with WRITE_EXTERNAL_STORAGE at runtime if you need access to a folder other than the app's default external folder.

- You can only request permissions that were declared in the manifest file (this is usually taken care by the compiler).
- Testing the permissions can be confusing as the user only needs to give permissions once. The solution is to uninstall the app from the device. Click on Ctrl + P (clean project) in the IDE and run again.
- The user actually approves groups of permissions. So if the user has approved the read contacts permission they will not be asked to approve the write contacts permission.
- Once you've uploaded your app to Google Play with targetSdkVersion set to 23 you cannot downgrade the target version back.
- Some Android 4.4 (API 19) devices do not allow access to RuntimePermissions.GetSafeDirDefaultExternal without explicit permission although they should. It it therefore recommended to set android:maxSdkVersion to 19 in the version based permission. It was previously set to 18.
Last edited: Mar 16, 2022
Click to expand...

Licensed User
Longtime User
Now you reached Android version
When should we expect B4A ?
Thanks again for your support .
If you liked my post , please consider a donation to my paypal email : [email protected]

Licensed User
Longtime User
hi @Erel, once the user has accepted the permission will he be asked again when the next time the app will perform the same task?

ok no need to answer have seen this now

i dont understand how to implement it in my app

Licensed User
Longtime User
ok just found out that when i check "RuntimePermission" and try to build the app i get an error something with Admob lib...

when i uncheck again runtime permission it works so there is a conflict between both libs.
>> Visit My

Please start a new thread for this question.

About AdMob, the best solution is to remove the reference to AdMob and add FirebaseAdMob instead: https://www.b4x.com/android/forum/t...tegrated-with-firebase-backend.67710/#content
The second option is to add this line:

Erel said:
About AdMob, the best solution is to remove the reference to AdMob and add FirebaseAdMob instead: https://www.b4x.com/android/forum/t...tegrated-with-firebase-backend.67710/#content
The second option is to add this line:
Click to expand...

I'm trying to manage permissions in app´s and I started with the example of this tutorial.
I do not get it to work and I do not understand where the problem is.
I attached the zip program to see if you can help me find the solution.
Thank you.

when I add the "Runtime Permissions" library an error (see image attacched) telling me not to find android-support-v4.jar
the file is added to the external libraries folder

Licensed User
Longtime User
How can I request for permission SYSTEM_ALERT_WINDOW (Draw over other apps) ? It's not exist in RuntimePermissions.

Staff member
Licensed User
Longtime User
It is not listed in the list of "dangerous" permissions: https://developer.android.com/guide/topics/security/permissions.html#normal-dangerous

Did you get an error when you set targetSdkVersion to 23?
[B4X] Features that Erel recommends to avoid
[B4X] "Code Smells" - common mistakes and other tips
S

Licensed User
Longtime User
If set targetSdkVersion to 23 and not accepted permission "Draw on top", my app crash with error:
android.view.WindowManager$BadTokenException: Unable to add window [email protected] -- permission denied for this window type

I want to check if permission "Draw on top" is not accepted, it will call "Draw over other apps" setting like image below. 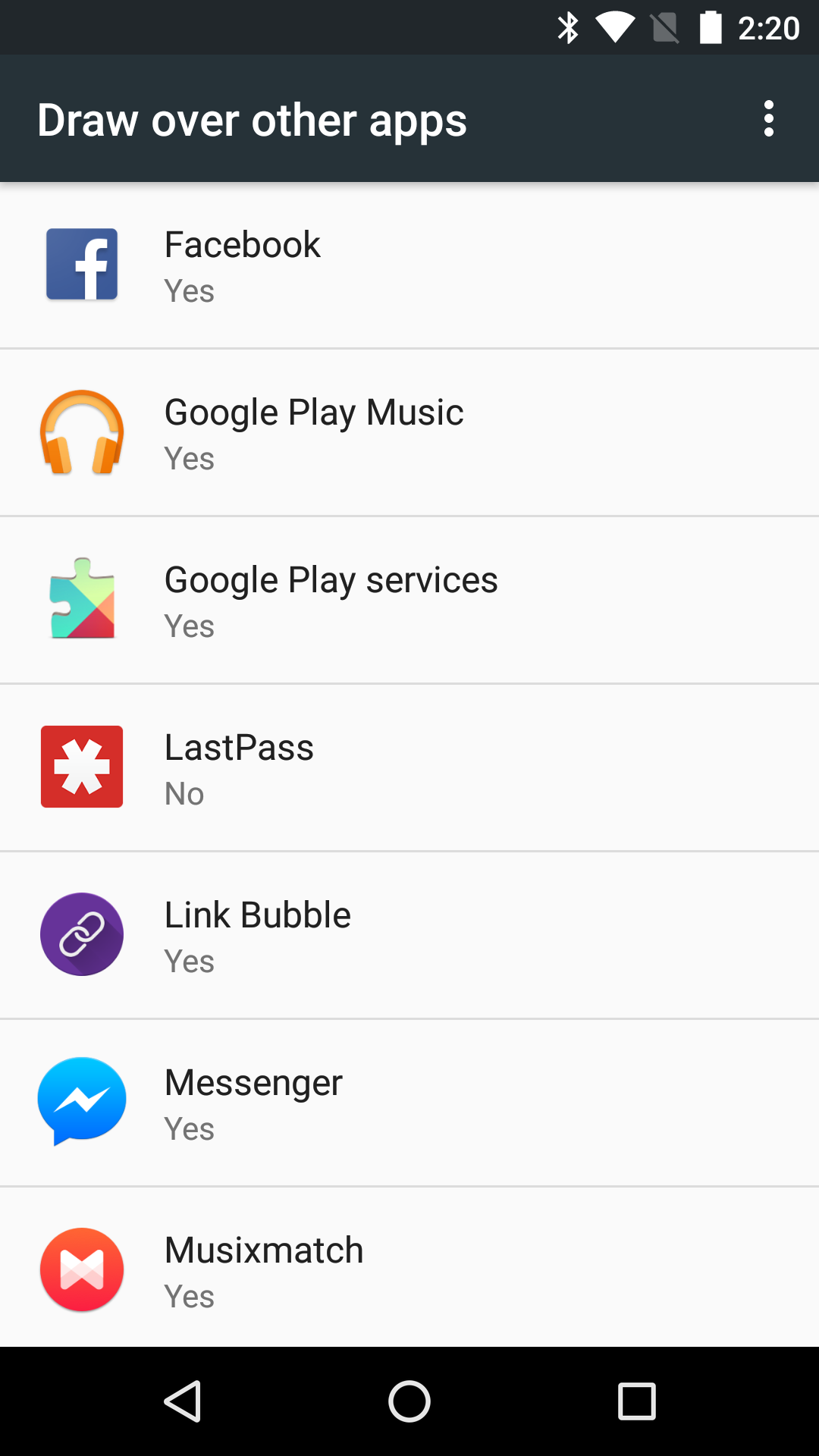 I'm not good at English, please understand. Thank you.

Staff member
Licensed User
Longtime User
This is not related to the runtime permissions. Please start a new thread in the questions forum.
[B4X] Features that Erel recommends to avoid
[B4X] "Code Smells" - common mistakes and other tips

Android Code Snippet Draw on top of other apps permission