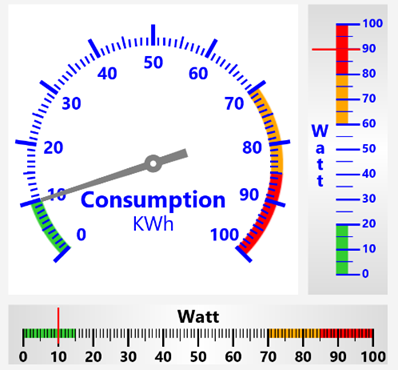 When you put them side-by-side like that, I can see now that linear gauges are just circular gauges straightened-out, ie zero curvature (or infinite radius?) That is some freaky coherence you've got going there. Next trick: the Theory of Everything

Diceman said:
The only other thing I can think of is an optional sliding set pointer like on a thermostat.
Click to expand...

klaus said:
I had to shorten the needle length from infinite to a finite value.
Click to expand...

Diceman said:
But what is 0 * Infinity?
Click to expand...

Nice try, but no.

Licensed User
Here is version 0.9 of a new class xGaugesRect.
Instead of adding the rectangular gauges to the current circular ones I made a new class.
It is easier for users because of the new specific properties which would overcrowd the current class.
For the moment, it works only with B4J and B4A, I have problems with B4i and BitmapCreator. 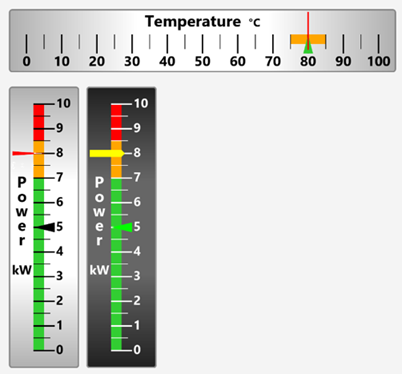 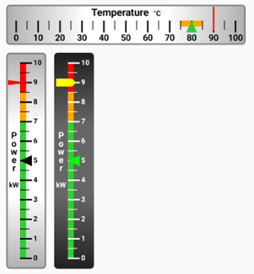 I would be pleased to have some beta testers.

Attached the class module and a demo project.

klaus said:
For the moment, it works only with B4J and B4A, I have problems with B4i and BitmapCreator.
Click to expand...

You can send me a project that demonstrates the problem and I'll try to fix it.
B4X programming - video tutorials
All Android developers should read
Teaching programming with B4X

Licensed User
Klaus, the gauges look really good. The silver gradient makes it look real.
Suggestions: It would be nice to be able to have NeedleShadowColor & CursorShadowColor (or at least some sort of outline) so it gives some depth to these 2 important indicators. This will give the needle and cursor some relief from the background so they appear to be separate from the background as if floating above the background.

Problem. I haven't found anything wrong with your code, but the sample B4J form is acting kind of weird (release mode and debug mode). I loaded xGuagesRect.B4j into B4J v8.50 and ran it. A blank form appeared with no controls on it. No errors were reported. I ran the designer and saw the 3 xGaugesRect views. I resaved the form and reran it. Same thing; blank form appears. I went back into Designer and moved the gauges around and resaved it, thinking it would update the form. When I reran the sample app it still displayed a blank form. I solved the problem by going back into the Designer and dropping a label somewhere on the form. Recompiling it and running it showed the gauges working just fine. It appears to me that a regular view has to be on the form otherwise B4J won't display the gauges at all. I went back into Designer and deleted the Label view and when I ran the app the form was blank again. Adding the Label back on the form got the form to display the gauges again. I told you it was weird.

That's it from me, at least for now. The gauges look really professional and will save a lot of screen space.
Rect gauges are slim and trim (conserves space). If you have more than 1 round gauge they are fat and need a lot of screen space to display properly.
Once you've gone Rect, you'll never go back (to Round).

Licensed User
Your blank screen sounds very strange.
I develop with B4J version 8.50 like you.
I added shadows, but not yet convinced.
Can you please check the attached version, I post only the B4J demo program.

klaus said:
Your blank screen sounds very strange.
I develop with B4J version 8.50 like you.
I added shadows, but not yet convinced.
Can you please check the attached version, I post only the B4J demo program.
Click to expand...

I tried your example and the shadows do appear, but like you implied they look flat without any dimension to them.
I looked around for a solution and found JordiCP's suggestion #13 for creating shadows at this link Neumorphism UI - how would you do this

Would this work?
R

Licensed User
Is it possible to redraw a guage with a change of Max and Min value in code
I would like to use guage.click to change the range.. An option is of course to have a another hidden quage appear I suppose
R