Other B4A-Bridge on Android Q

Licensed User
Longtime User
Hello Erel,
So last night I received the Android Q Beta 4 update (I never installed the first 3 Betas) onto my spare phone. I wanted to test an app and also my widget.

All the above is done without turning off my phone screen.

Message while using B4A-Bridge whilst the activity is in the background. 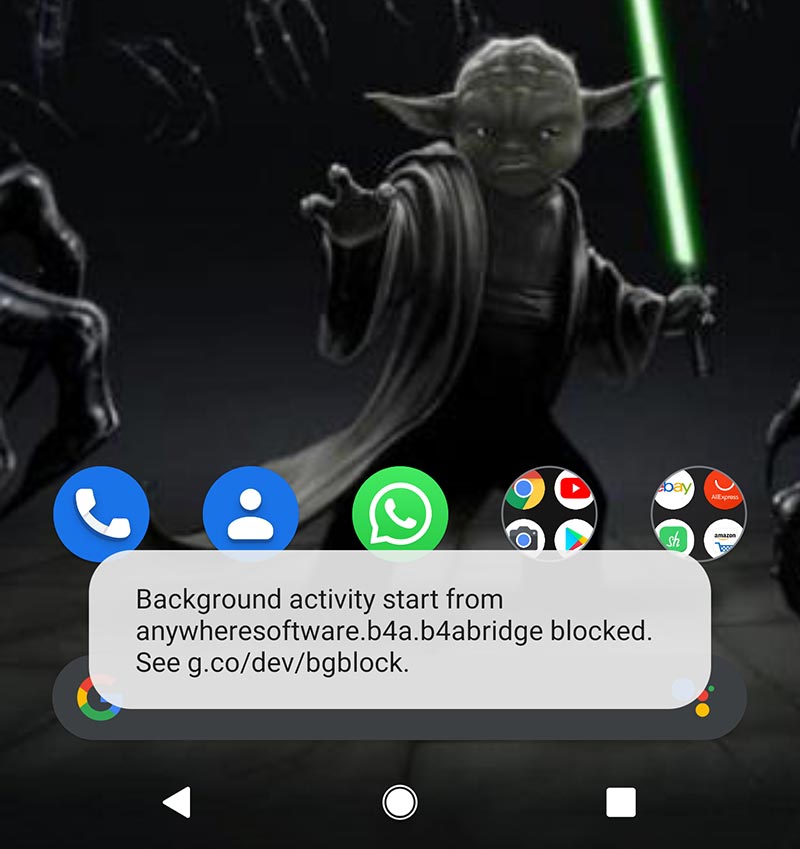 Simplicity is the key...
Sort by date Sort by votes

Licensed User
Longtime User
You are using which B4A Version, Peter?
Just want to make sure you are using a recent version as it may be relevant.
Last edited: Jun 6, 2019
Regards Manfred

DonManfred said:
You are using which B4A Version, Peter?
Click to expand...

Hiya Manfred,
The latest B4A V9.01.1 and Bridge V2.55. On Android P everything works 100% perfect as expected, but this only started happening on Android Q, I'm running Beta 4.
Simply Invoice

as written i just wanted to make sure you use this version.

Ok, seems to be a new issue for @Erel.
Regards Manfred

Licensed User
Longtime User
Looks like Google has yet again screwed with Android with a breaking change . Have you read the page at the link in the error message?

It says you can disable it for testing by

Navigate to Settings > Developer options, and enable the Allow background activity starts option.
If you have benefitted from my work

Staff member
Licensed User
Longtime User
I'm familiar with this issue and it is indeed related to Google documented changes.

- Starting from Android 8 the app must be visible before it can install other apps. B4A-Bridge runs in the background and moves to the foreground right before installation starts.
- Starting from Android Q it is no longer possible to start activities from the background. I have several ideas on possible workarounds for this limit. However you can disable this restriction. Go to developer settings and look for a setting that allows activities to be started while in the background.
[B4X] Features that Erel recommends to avoid
[B4X] "Code Smells" - common mistakes and other tips
Upvote 0

Licensed User
Longtime User
Thank you all for the responses. I don't need to disable it as yet as I only installed Android Q Beta 4 for testing purposes, I'll still be coding and testing using Android P most of the time on another phone for now.

I did quickly read the link in the message, but I still decided to create this post just in case.

Actually I might disable it on that particular device for now.

Peter Simpson said:
Actually I might disable it on that particular device for now.
Click to expand...

Please test it. I haven't tried it yet myself.
[B4X] Features that Erel recommends to avoid
[B4X] "Code Smells" - common mistakes and other tips
Upvote 0

Erel said:
Please test it. I haven't tried it yet myself.
Click to expand...

Hello Erel,
You requested it so I've done it.
Okay I enabled 'Allow background activity starts' in developer options as stated by @agraham (thank Andrew) and yes apps are now installing like they were previously doing in Android P. B4A-Bridge is now brought to the foreground and my apps are now installing with no issues whatsoever in Android Q. The message in my screenshot above still appears but unlike before that apps are installing.
Last edited: Jun 6, 2019
Simply Invoice

Licensed User
Longtime User
Seems as if Google is choking off android more and more with each release, pretty soon I think they will be playing in Apple's territory.
Upvote 0

Peter Simpson said:
The message in my screenshot above still appears but unlike before that apps are installing.
Click to expand...

The message itself will not appear after the beta.
[B4X] Features that Erel recommends to avoid
[B4X] "Code Smells" - common mistakes and other tips
Upvote 0

Yes I know that this is an old thread of mine, but I'm continuing on from my original post.

So it looks like in the latest version of Android Q beta that I received last week on my device has stopped showing the toast message warnings in my first post (which you could bypass), Google have also removed the Allow background activity starts option from the developers options on devices.

What do you think Mr U?

Below is the updated information from developer.android.com.

Peter Simpson said:
What do you think Mr U?
Click to expand...

It will be managed in some way. Maybe with a notification to make it easy to move it to the foreground. There are other possible solutions that I need to check.
[B4X] Features that Erel recommends to avoid
[B4X] "Code Smells" - common mistakes and other tips
Upvote 0

The solution is based on an exception that was added before Android Q was released: https://www.b4x.com/android/forum/threads/startactivity-from-service.108771/#post-682671
[B4X] Features that Erel recommends to avoid
[B4X] "Code Smells" - common mistakes and other tips
Upvote 0

You always manage to find a great solution to developers issues.

Simplicity is the key...
Upvote 0
You must log in or register to reply here.

Android Question Issues while connecting through bridge with b4a 12 beta