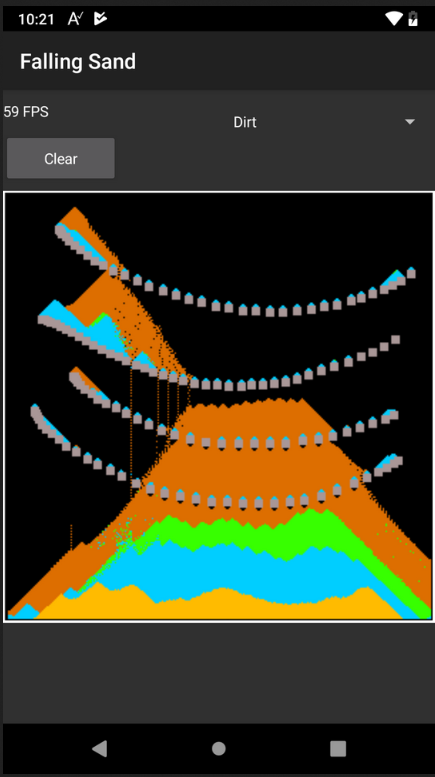 The main challenge here is the performance. All particles are updated if needed and redrawn every cycle.

The Particles array stores the state of all "game pixels". A value of 0 means that the pixel is empty. Other values mean that there is a particle on that pixel.
Sand particles move down or diagonally if they can.

The RowsState array tracks the rows that are considered dirty. Non-dirty rows are skipped.

Single dimension arrays of bytes can be accessed in an optimized way in B4i with Bit.FastArrayGet / Set methods (https://www.b4x.com/android/forum/threads/92951/#content). I used these methods in some of the cases.

All the important code is implemented in the Game class, which is of course shared between the three projects. No sprites are used in this game. The drawings are done in the MoveParticles sub.
As in the Tetris game the layout is managed with the designer script.

You need to change the GameUtils module that is included in the zip files with the one attached separately.

I don't think I will ever be an expert! 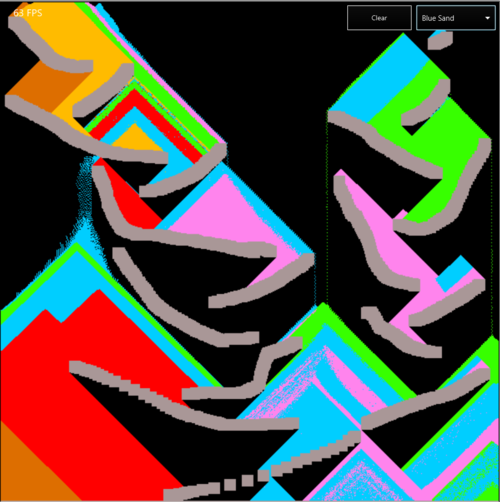 [B4X] AS Views Overview
You saved time and effort? You like what i do? show it with a small donation or with a coffee.

Staff member
Licensed User
Longtime User
Projects in the first post were updated with a fix to a bug that caused the game to crash.

The cause of this bug might be a bit interesting as it is a pattern that can be used in many cases.

When the particles move we need to check the status of the nearby pixels. This causes a problem with the pixels near the edge. We can add checks to assure that we don't try to access out of bounds pixels but it can be annoying to always check it when 99.5% of the pixels are known to be inside.
So instead we are creating ROCK borders when the game starts:

B4X:
This way there are less edge cases to deal with.

So where was the bug?

With the Eraser feature. It didn't check for the edges and could have erased the borders themselves. This feature is the only feature that overwrites other types of particles.
This caused the sand particles to fall outside of the BitmapCreator and even outside of the phone in some cases. The fix is to restrict the erasing position. It was added to AddParticles sub.
[B4X] Features that Erel recommends to avoid
[B4X] "Code Smells" - common mistakes and other tips

Staff member
Licensed User
Longtime User
It should work. Try to uninstall it, clean the project and run again. If it doesn't work then please start a new thread for further discussion.
[B4X] Features that Erel recommends to avoid
[B4X] "Code Smells" - common mistakes and other tips

Licensed User
Longtime User
I hope you don't mind me jumping over here to talk about how this particle demo works. I'm trying to find the elements responsible for binding the Particles() byte array to the "live" bitmap. Are the rows redrawn only when needed? I'm getting an almost steady FPS no matter how many particles I add, so this is nice.

Game.Tick calls MoveParticles. Most of the logic is implemented in this sub.
This sub draws the particles with calls to bc.SetARGB.
[B4X] Features that Erel recommends to avoid
[B4X] "Code Smells" - common mistakes and other tips

Erel said:
GameUtils.MainLoop calls Game.Tick every loop and then asynchronously renders the frame with DrawBitmapCreatorsAsync.

Game.Tick calls MoveParticles. Most of the logic is implemented in this sub.
This sub draws the particles with calls to bc.SetARGB.
Click to expand...

Should I be worried that the async redraw might queue up, or fall behind after say, a day of running?

Staff member
Licensed User
Longtime User
In this game I never noticed a case where it slows down.

In X2 games framework, which is an evolution of GameUtils, the case where the frame isn't ready is handled in a more sophisticated way. You can see it in X2 Source Folder in X2Utils class.
[B4X] Features that Erel recommends to avoid
[B4X] "Code Smells" - common mistakes and other tips

B4X:
I assume that the BuildPatternCache lines can be deleted but maybe I'having a bad day but I can't see how to fix the Wait For.
If you have benefitted from my work

Sorry, but I don't answer questions by PM or email. Please post your queries in the forum.

Staff member
Licensed User
Longtime User
The B4A project does work. There is a note about GameUtils that you need to update (the B4A works without it).
[B4X] Features that Erel recommends to avoid
[B4X] "Code Smells" - common mistakes and other tips

Erel said:
You need to change the GameUtils module that is included in the zip files with the one attached separately.
Click to expand...

Sorry, but I don't answer questions by PM or email. Please post your queries in the forum.
You must log in or register to reply here.