B4J Question I tried to report a BUG but I was ridiculed.

But an administrator told me that this does not appear to be Windows 7.

Then someone "liked" this.

Then another "very smart" user appears and says that there is no place to register the BUG: "And this is NOT the B4J forum!"

And the administrator still liked what the other said, disqualifying the information from BUG.

Because this is a useless thing. It's just an unfounded question, and it can't be a BUG.


So, gentlemen. Do yourself a big favor and be more humble.

Because you are old programmers, you can't afford to be that arrogant.

Because this is only bad for you who are old programmers, and don't even know how to configure an operating system theme.

And on top of that, a very smart programmer says he is not a BUG, but he didn't even try to reproduce the problem, he just decided to say that it was worthless.

Your behavior was unfortunate. I hope this doesn't happen to other users. 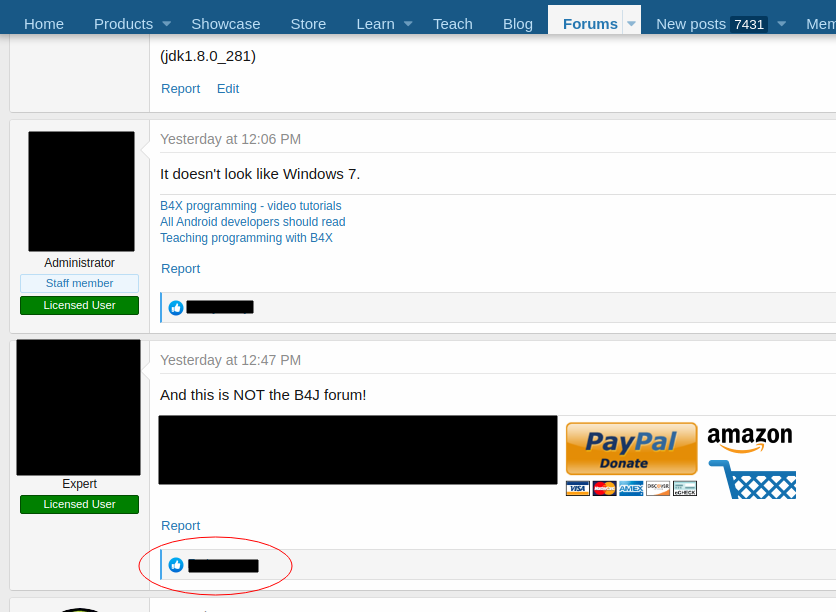 Licensed User
Longtime User
"It doesn't look like Windows 7" means: "That seems not to be Windows 7"; and in fact it looks more like Windows 98.
I am using Windows 7 and the taskbar looks quite different; maybe it depends on the theme.

However, no one wants to mock others (except myself, every now and then

Licensed User
Longtime User
I was the one who 'liked' Erels response. No need to hide it, this is not this kind of forum.

I had absolutely no intention at all to ridicule you. I often use the 'like', as an 'I agree'. As a matter of fact my first reaction when I saw LucaMS response here was pressing the 'like' button because I agreed with it: without the context of themes, your screenshot did look like Windows 98 at first glance so I'm sure this was what Erel meant.

I could've sworn (it was late, so I may be wrong and Erel does move topics to the correct forum if this happens), the original post was indeed not under the B4J questions, but under one of the other platforms. This was not an attack by CableGuy, it happens to the best of us by accident. But again, I may be wrong.

I could easily be offended by the 'don't even know how to configure an operating system theme', but let me reassure you, I don't. I rather believe this was written out of frustration. We all have been there!

So, in short, apologies if I offended you in any way and I was glad to see this morning you've managed to solve your problem. I'm sure if I wasn't already in bed at the time of reading it, I could've been more helpful.

Staff member
Licensed User
Longtime User
It was posted in B4R forum so I moved it to B4J forum. If it was posted in B4J bugs forum I wouldn't have moved it.
[B4X] Features that Erel recommends to avoid
[B4X] "Code Smells" - common mistakes and other tips
Upvote 0

alwaysbusy said:
As a matter of fact my first reaction when I saw LucaMS response here was pressing the 'like'
Click to expand...

Licensed User
Longtime User
And to clarify, I am the "And this is NOT the B4J forum"
It was intended to catch Erel's attention as he is the only one who can move posts between forums.

Now, about your post...
What you posted, as Title, helped no one to try to help you, plus, as a body to you title, you limited yourself to posting an image if your desktop. No other explanation.
If I go to a Audi Forum and post I'm Having trouble with my Audi A3, and the just post a photo of a Seat Ibiza... guess what will happen? (For the less knowledgeable, both cars share A LOT of common things, like interiors and other parts.)

Then later as response, you limited, once again, to just posting a photo of, what now looked like, a windows7 desktop.
Again, no other explanation...

As @alwaysbusy correctly remarked, this IS NOT that kind of Forum.
We don't like to, and therefore try not to, ridicule anyone... we try to answer even the most "already asked 100000 times" questions... but we are not mediums, we cannot guess what Java version you have installed, if it was working before, etc...

Staff member
Licensed User
Longtime User
I also want to clarify: You were not ridiculed and I apologize if it looked like that.
Don't give too much thought for each "like". This was just me thanking @Cableguy who raised my attention that the post was in the wrong place (B4R forum).
[B4X] Features that Erel recommends to avoid
[B4X] "Code Smells" - common mistakes and other tips
Upvote 0

Licensed User
Longtime User
I thank you all, and I suggest you take a screenshot of your posts. So that later, if they are moved, do not be mocking your face saying that it was posted in the wrong place.
Upvote 0
You must log in or register to reply here.