Staff member
Licensed User
Longtime User
There is a new tool available for compiling libraries. It is much simpler: http://www.basic4ppc.com/forum/showthread.php?p=173756


I've uploaded a video tutorial to YouTube which explains the steps required for building a library with Eclipse: Basic4android Tutorial - Creating a library - YouTube

The doclet tool and more information are available here: http://www.basic4ppc.com/forum/libr...ns/6810-creating-libraries-basic4android.html

One step is missing from the video by mistake. Exporting the project as Jar file from eclipse.
It is done by right clicking on the project - Export: 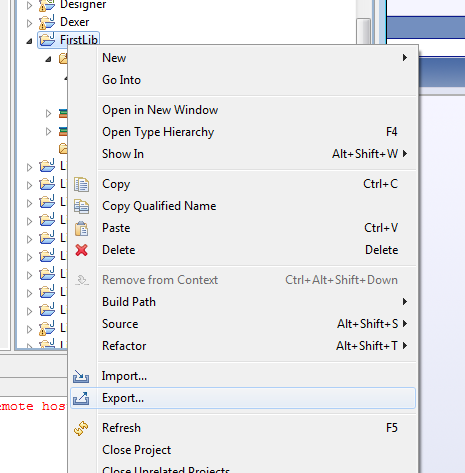 You should then choose jar and the default options should be good.
[B4X] Features that Erel recommends to avoid
[B4X] "Code Smells" - common mistakes and other tips

Staff member
Licensed User
Longtime User
As this is the first video tutorial, I would be happy to hear your feedback.
[B4X] Features that Erel recommends to avoid
[B4X] "Code Smells" - common mistakes and other tips
C

If I may, first, try to get the sound a little louder and maybe normalizing it to keep the same volume level and second, using this example, a more detailed explanation about what you're doing, I know is a simple multiply function but it would be helpful to know what are you doing, that would help beginners to get a better grasp.

Video tutorials are always good even if they are simple as this one.

Licensed User
Longtime User
Very good Erel, great initiative. I think it's great that you encourage this open approach. I can see a surge in new libraries from users.
If you profit from my contributions or just find them useful feel free to:

Cool to have video tuts, another big reason to stick and enjoy with your program.
And a big boost for beginners as well like me.

Hopefully more will come in the future as a standard.

Licensed User
Longtime User
Even I understood the tutorial.......very enlightening!

This is very very easy than how to create library article.

Waiting the next video ...

I have not programmed in java but I watched the video and thought I would get eclipse and give it a crack. I dont think any of you have any reason to fear I might become expert but I was able to get a silly "hello world" lib up and running first go. I dont know what I can apply it to but at least I am beginning to understand what is behind all the great stuff you guys put out there for us. Thanks.
Trevor
Ballarat
Victoria
Australia
B

How about doing a video on how to wrap java code and use from B4A?
S

Licensed User
Longtime User
Hi Erel,
I've followed the video. The FirstLib.xml is written but not the .jar.

Licensed User
Longtime User
Thanks Erel. Sorry I had missed that.

I've taken some java code and created a library. When I try and use it in Basic4Android I get the error message:


Any idea as to how to go about solving that?

Licensed User
Longtime User
Erel
Thank you for this video, even I got it finally...
Derez

Licensed User
Longtime User
very useful
i was able to create my library
i a few minutes
:sign0142:

I just tried to make a lib, following step by step the tutorial. The final step didn't produce the xml and jar file. Actually it doesn't produce anything. The only "variant" with respect to the video example is that I downloaded the BADocLet in a folder and, instead of giving same folder as target folder for xml file, I gave another (that was of course created before). (Before sending this post, anyway, I tried with same folder, and same result). DocLet folder was copy/pasted as in video, and same for xml target folder. Unluckily I come from VisualStudio C++ programming and I am new to Eclipse and Java. I attach a zip file containing all the screen-shots. I don't figure out where is the problem and I fear it could be an obscure Eclipse, java or android installation issue..
(note: in my folder strings "Programmi" is the equivalent of "Program Files")

About my previous post:
I saw that I was missing Export option, described in Erel's post (I went to video before reading all..). So this created the jar. But the xml is still not created..

Answering to my question. It seems that the reason is that I wrote DocLet and not Doclet in the Doclet class path... Now the xml appeared. Now I confirm that everything is ok.
You must log in or register to reply here.